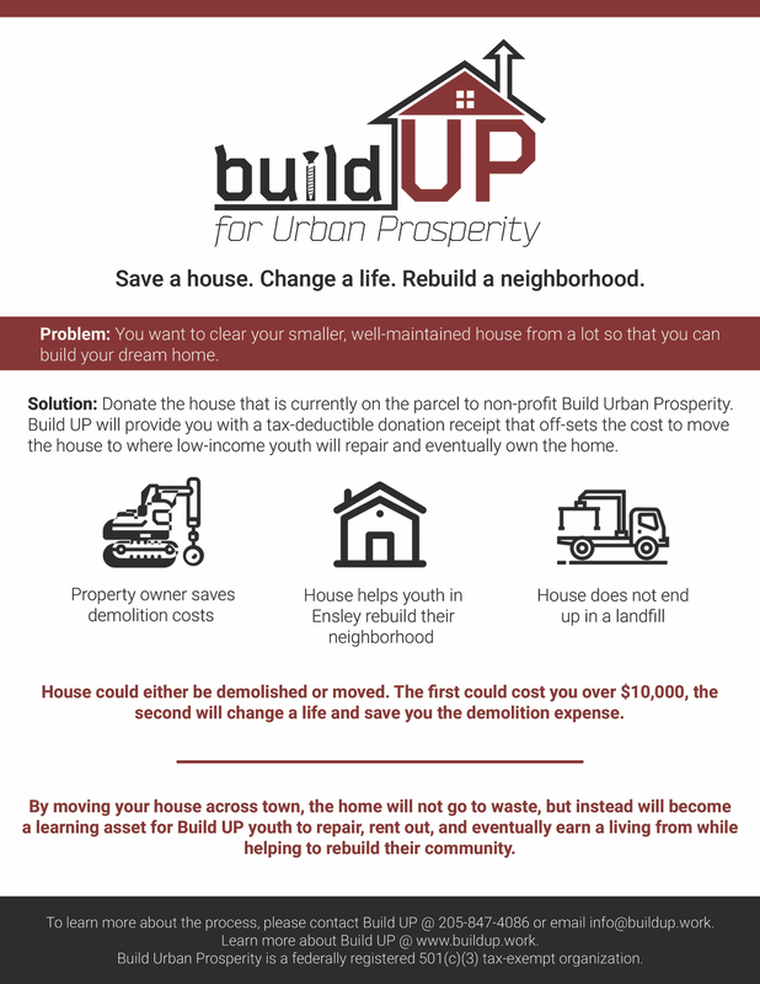 One realistic donation relocation example is described below.  Each property owner's tax situation is unique.  Build UP and Moving UP Collaborative are not suggesting that the scenario below would work the same for other donors, but the example simply describes a potential tax-impact event.  Build UP provides no tax advice and encourages all potential donors to contact a tax professional.

Property owners are looking to sell the home they have lived in for ten years to move elsewhere.  The house was built in the late 1960's, but has been well cared for and moderately updated.  After contacting Build UP or Moving Up, an appraiser appraises the property to be valued at $325K, $145K of which is in the value of the house structure itself, leaving the land's value at $185K, although a number of recently cleared lots nearby have been selling for between $325K-$375K.

However, since they are now donating the home to Moving Up Collaborative, a 501(c)(3) tax-exempt (non-profit) organization, with no other charitable gifts for the year they would be looking at the following scenario: their AGI becomes $155,000 dropping them down to the 24% Federal tax rate, and their 2019 tax burden now becomes: IRS- $31,489.50 and Montgomery- $7,450 for a total of $38,939.50.  This entails a likely tax refund in the spring of 2020 of more than $55,000.  If the couple's AGI is higher, the savings are likely even greater.  If AGI is lower, then the couple would likely carry over the tax deduction the following year.

Moving Up graciously covers the cost to move the house. The property owner generously pledges to make a $30,000 cash donation to Build UP, a legally distinct non-profit.  In this case, the couple could then potentially sell the lot for even more, knowing that most interested buyers would have demolished the house to build a larger, more modern home, regardless.  This allows the couple to potentially pocket $25,000 in additional dollars from both donations' tax benefits and potentially another $20,000 in added value for selling the lot absent the house.

Everyone wins.  Build UP students, families, and the Birmingham community now have a quality starter home to help end generational poverty and rebuild the neighborhood.  The homeowners have benefited financially by $40,000+ by donating the home then selling the land, while not paying the demolition costs.  The environment wins by keeping a quality home from a landfill. Let us partner with YOU!